Strategy specialization is commonplace now in the private equity investment industry as GPs look for ways to distinguish themselves from the broader and increasingly crowded market, and focus on areas that either leverage their expertise, network or both, all with the aim to deliver superior returns to LPs. Specialization can come from a variety of forms including industry and sector, market segment and deal size, or region and country.

When it comes to the latter, one argument in favor of region-focused funds is that the GP has the deep, local network to source deals and opportunities that other pan-continental GPs who helicopter in and out might not have access to. Plus, the locally-based investment professionals have the language skills and cultural background to successfully understand and navigate the regulatory framework and local dynamic.

However, the counter-argument is that the bigger, pan-continental GPs have the resources and can, and in fact, do have local teams deployed on the ground in specific countries, so the claimed advantages of a local GP no longer hold true. Additionally, these GPs also aren’t bound by fund investment period pressure to invest in a specific market even if pricing multiples are unattractive.

From an LP’s perspective, investing in a broader focused fund such as a pan-continental strategy makes sense to reduce the exposure risks of a region or country-specific fund (for example a pan-European fund vis-à-vis a DACH German-speaking or Germany-focused fund) by providing additional geographic diversification.

When it comes to pan-European funds and regional-focused funds, what does history tell us?

In terms of aggregated fund Net IRR returns across vintage years 2008 through 2018, which is sufficiently long enough to capture the J-curve effect of different vintage year private equity funds, Figure 1 shows that Western Europe (i.e. UK and France) focused funds outperform Pan-EU funds when measured by both Pooled[1] and Mean returns by 1.5%-points and 7.1%-points, respectively. Southern Europe funds show even higher and more substantial out-performance against Pan-EU Pooled and Mean by a margin of 2.8%-points and over 14%-points, respectively. Southern Europe Pooled is more comparable to Western Europe and Pan-EU Pooled.

German-speaking DACH under-performs all other segments by a wide margin for both Pooled and Mean, while Nordic and Benelux are more comparable to each other but still behind Pan-EU by 1.5%-points in Pooled and 2-4%-points in Mean, and even farther behind Western and Southern Europe. As these last three regional strategies show, region-focused funds don’t necessarily deliver higher returns compared to diversified and flexible funds that can invest across Europe.

[1] The CEPRES Platform is built on a database of primary-sourced, gross and net cash flows, and the underlying operating financials of portfolio companies. The Net IRR analyses presented here are based on fund net cash flows and the Pooled measure is the IRR calculation on the overall aggregated net cash flow stream across all funds in the sample. 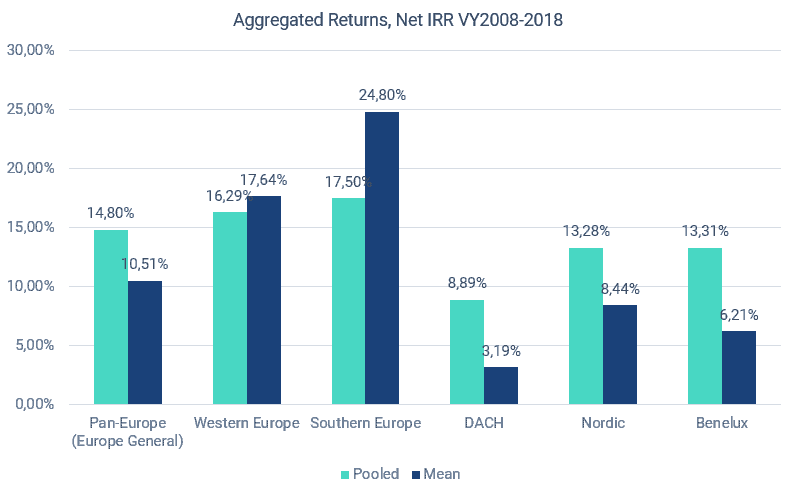 Overall aggregated returns measured by Pooled and Mean only provide a one-dimensional view of performance, so let’s look at it from another angle, namely, return spread and the general consistency of returns for these different strategies. Figure 2 shows that while overall performance ranking is similar to what is shown in Figure 1 with Southern Europe continuing to lead with Lower Quartile, Median and Upper Quartile outperforming, there is also a tighter spread between Southern Europe’s Median and Upper Quartile compared to the other regions, as well as a downside Lower Quartile of 9% Net IRR that is significantly better than the 3% for Pan-EU and Nordic, and the negative returns for the other regions, but almost 11%-points below its 20% Median.

Western Europe shows a broad spread with a Lower Quartile at nearly -2% and stretching to over 20% in the Upper Quartile. This is in contrast to Pan-EU and Nordic where upside potential is relatively moderate at 16%, but the spread across the quartiles is tighter, indicating more consistent fund net returns for these two regional strategies.

The other two regions that show a negative Lower Quartile are DACH and Benelux with the latter having a broad return spread from -1.3% Lower Quartile to 6.1% Median and 18.4% Upper Quartile.

In comparison, DACH has a narrower return spread albeit with a significantly lower Top Quartile of 12.3%. Overall, in terms of return consistency, Pan-Europe and Nordic are the most consistent with tighter returns across the range, from 3% Lower Quartile to 10% Median and 16% Top Quartile. 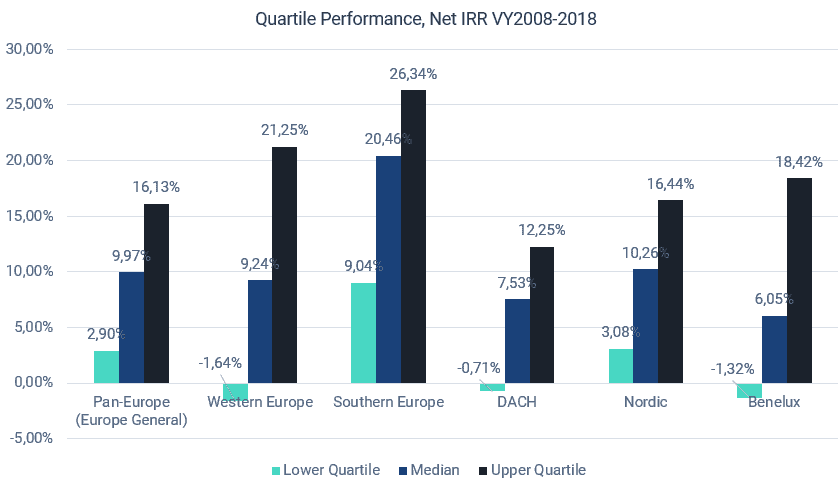 Specialized investment strategies can generate out-sized returns, and in the case of regional European strategies, this is true for Southern Europe and Western Europe. However, higher returns from region-specific funds compared to Pan-European funds can also come attached with higher return spread, and therefore, increased investment risk. In other words, achieving out-performance in a particular region is more dependent on fund selection and committing to the right GP who can deliver a top quartile performing fund. To further extend this analysis and verify its findings, a deeper dive into country-specific funds would be necessary, followed by a deal level analysis to compare the returns of country deals invested in by domestic and non-domestic GPs: is there such thing as a home-court advantage in private equity?

CEPRES has worked tirelessly to deliver value to our customers. CEPRES has added major capabilities to power your private equity digital transformation. Simply, the most powerful platform in private equity got smarter.

Technology investing in private equity, already a hot sector before covid, gained further momentum during 2020. The data shows further increases in capital flowing to tech investment deals and away from traditional sectors, combined with increased returns and thriving fundamentals.

CEPRES has worked tirelessly to deliver value to our customers. CEPRES has added major capabilities to power your private equity digital transformation. Simply, the most powerful platform in private equity got smarter.

Technology investing in private equity, already a hot sector before covid, gained further momentum during 2020. The data shows further increases in capital flowing to tech investment deals and away from traditional sectors, combined with increased returns and thriving fundamentals.