So far we’ve examined revenue growth and EBITDA margins in Asia and North America as part of our private equity data analysis on the underlying operating performance of portfolio companies in these two important markets. The third driver of enterprise value development in private equity value creation is multiple expansion. (Just to clarify, there is a common misconception that leverage is part of value creation when in fact leverage impacts equity and not enterprise value.)

As shown in the figure below of the value creation bridge on EBITDA development for Asia deals between 2004 and 2018, the single largest driver is Revenue Growth with a 60% contribution of the total value creation of enterprise value, which aligns with our previous analysis on revenue CAGR that showed the outperformance of revenue growth for Asia portfolio companies. The third step in this value creation step-chart is EBITDA Margin Expansion which is actually a low contributor to value creation at just 3% when we aggregate all Asia deals across the 15 year period.

Another important driver is Multiple Expansion on Exit EBITDA, the fourth step in the chart, which captures the value creation based on EBITDA development that is due to the aggregated effects of revenue growth and changes on the EBITDA multiple over the lifetime of the deal; it has the following calculation:

As shown in this simple formula, there are three variables that contribute to this calculation and both Exit EBITDA Multiple and Exit EBITDA can fluctuate in either positive or negative directions during the course of the GP’s investment holding period. This means that the overall effect can be due to a combination of changes - pricing multiple and EBITDA. While we can’t clearly distinguish between multiple arbitrage (GPs buying low and selling high) and actual operational improvements that drive up the Exit EBITDA, what we want to see is an overall positive contribution. For Asia deals, Multiple Expansion on Exit EBITDA is the second largest contributor at 37% of the overall enterprise value created. 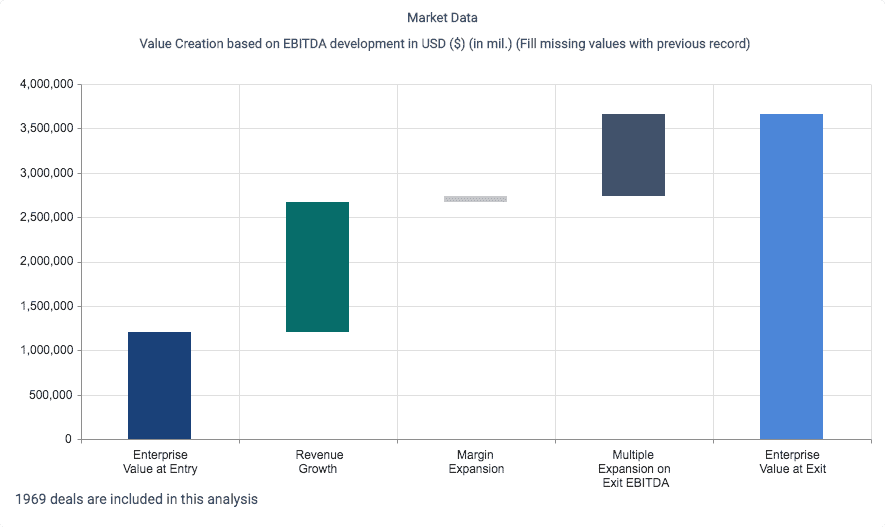 The value creation bridge for North America deals between 2004 and 2018 is somewhat similar with the two largest drivers being Revenue Growth and Multiple Expansion on Exit EBITDA at 36% and 57%, respectively, as shown in the figure below. However, more important is that Margin Expansion is also very low at just 7% which is just slightly better than the 3% for Asia.

From these value creation analysis charts, it is interesting (and ironic) to see that improving EBITDA margins at portfolio companies play such a small role to drive positive enterprise value development in both Asia and North America. For now, returns are based on value creation that is driven by growing revenue and multiple expansion, which works well in a positive market environment, but what happens in a weak market? Further analysis on this topic would be to dissect the timeframe into pre- and post-financial crisis eras to evaluate the value creation drivers. 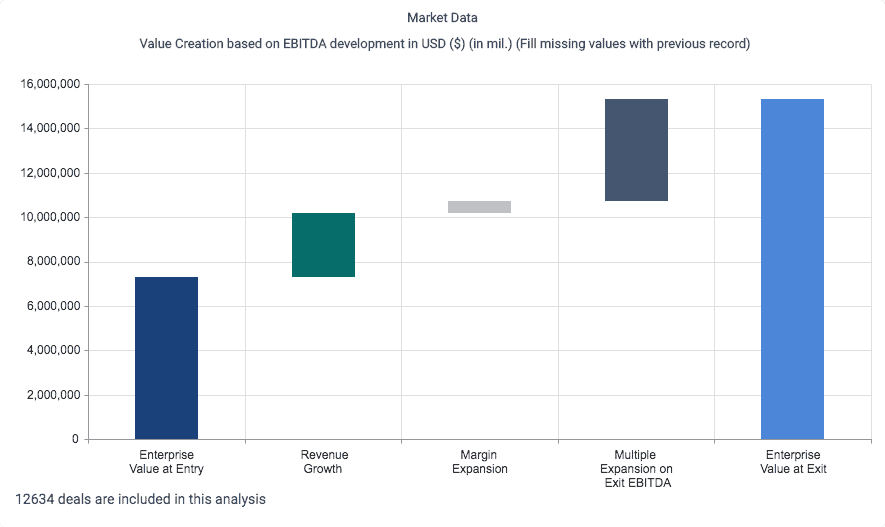